Thank you, Sakagura & Karaoke for making me feel 29

Right now, everything seems loud.  The usually pleasant, tapping sound of typing is now making me close my eyes and rethink waking up this morning and deciding to post.  And for the love of Pete, that kid upstairs who enjoys just running laps back-and-forth, back-and-forth, back-and-forth, BACK-AND-FORTH on my HEAD for hours is driving me nuts.  At first we called him Speed Racer and just chuckled at the fact that we could hear him running and wondered what exactly he was doing.  Now I don’t care what he’s doing, I just want him to stop.  I don’t know what the deal is, but if his parents don’t want to take him outside to run around, I’m happy to babysit and just take that kid to the park with an extendy leash thing.  I’m trustworthy.  I’ve seen Dog Whisperer.  Exercise, Discipline, then Love…  Ok, seriously, I’m taking a break now and burying my head under eight layers of pillows.

Ok, one nap and a bowl of matzo ball soup later and I’m feeling a little more human.  I no longer have the urge to walk the neighbor’s child, either.  How did  I end up in such a state?  Well, it’s a potent combination of sake, followed by beer, followed by Soju and karaoke.  Yeahhhh…  Luckily, I did remember to bring my camera to dinner and sake at Sakagura last night before the night descended into a blur of loud singing/shouting, tambourines, and a mini-light show.

This wasn’t my first trip to Sakagura – I’d actually been one time before about 2 months ago.  I’d sat at the bar with a friend and sipped on both filtered and unfiltered sake.  Sake is always good, but I especially love it in hot, humid weather.  Crisp, cool sake has a way of just sliding right down your throat – instantly refreshing.  After my first experience at Sakagura, I was savoring that sense of anime ninja kitten happiness that only sake brings when all of a sudden I heard a woman yelling, “Miss!  Miss!  Excuse me, Miss!”  I turned to see a well-heeled woman running with her daughter towards me from across the street.  It was dark and late, so I waited thinking that she might be lost.  When she finally reached me she said, “I’m sorry to bother you, and please don’t be alarmed, but I’m a psychic.  You give off a crazy energy and I think you need to have a reading.  You’re smiling on the outside, but you’re empty on the inside.”  Uh, what?  Grrreat.  This kind of thing only happens to me.  When I told my boss about it later, he said, “You should have responded, ‘I’m not empty.  I’m full of sake.'” 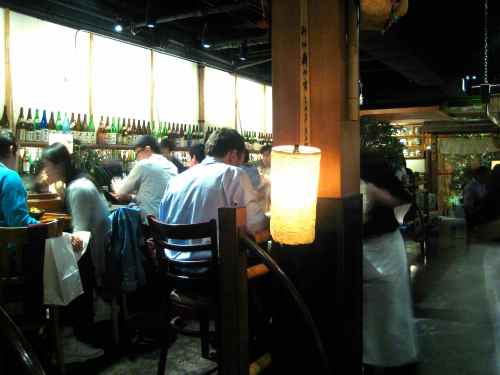 This trip to Sakagura was much less eventful, but equally delicious and satisfying.  If you’ve never been before, it’s a little difficult to find.  The address is 211 E. 43rd St., between 2nd & 3rd Ave, in the basement of an office building.  There’s only a small sign in the corner of the doorway to tell you that it’s there.  What makes it even more confusing is that there’s a giant Japanese restaurant right next door.  Once you make it through the lobby and down the building’s stairwell, you’re rewarded with a great sake bar with several tables, and bathrooms that look like sake barrels.

Overall, the meal was good.  We ordered a mixture of delicious cooked dishes and sashimi, with the sashimi dishes winning hands down.  My top 3 were the Tsukune chicken meatball, the Sake Ikura Don salmon sashimi and roe steeped in soy sauce and served in rice, and the Kaisen Don mixed sashimi with kimchi.  The chicken meatball was all about texture – super tender and juicy without any trace of overcooked rubber.  The sauce was just so-so, but the meatball was great dipped in the sesame dressing that came with our seaweed salad, which turned out to be my favorite thing of the night.  I know, I know – it’s just sesame dressing, which I’m sure we’ve all had a thousand times. But damn, this dressing was PERFECT: well-balanced acidity, good salt, nice sesame nuttiness, and just a hint of sweet.  PERFECT.  I could have drank the cup like a soup.  I even poured it over my leftover rice and hungrily chomped it down. 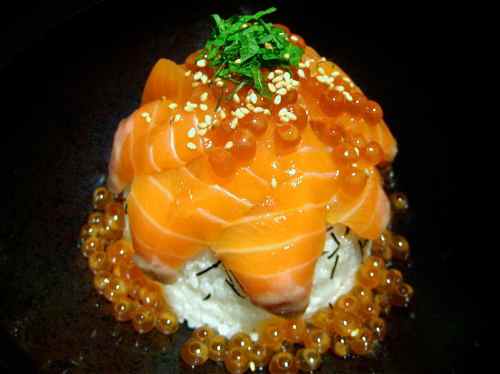 The salmon sashimi again had a beautiful, tender texture and the sweet, buttery salmon taste was complimented nicely by being steeped in soy sauce first.  Served over tangy sushi rice surrounded by ikura (salmon roe), it was extremely pleasant.  And the mixed sashimi with kimchi rounded out the night with the sweet sashimi picking up the spicy, tangy cabbage notes from the kimchi.  I could have eaten the whole bowl of tuna, fluke, salmon and squid by myself.  I wasn’t paying attention, so I actually might have…  Speaking of fluke, the Hirame Ponzu thin-sliced fluke with grated dikon and citrus vinaigrette was also delicious – probably #4 on my list from last night.  Dessert was both a hit and a miss: black sesame crème brulée and ice cream are always yummy.  Salted chocolate sorbet sounded promising, but was a little too salty (and this is ME saying that) and had a rather less-than-appetizing plating.  Just two, round scoops resting on each other in a shallow bowl…

I will definitely go back to Sakagura, most likely to try the homemade soba noodles.  I’ve never had Sakagura’s, but I’ve loved soba noodles every since I was a little girl and traveled to Japan with my family.  Actually, I’d love to get the cold soba noodles and a side of that ridiculously good sesame dressing.  Well, the rest of the night was a karaoke blur.  Right now, I’m just so grateful for seltzer water and aspirin this morning – breakfast of champions. 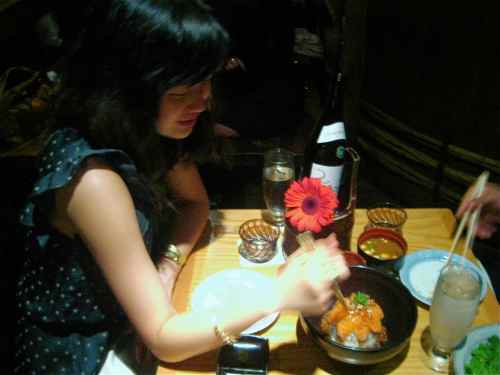 My friend, Eunice, about to dig into salmon sashimi

Filed under Eating my feelings and paying for it

2 responses to “Thank you, Sakagura & Karaoke for making me feel 29”