This past Saturday, I had the opportunity to be Nick Suarez’s (Food Competition King) sous chef for the 4th Annual Great Hot Dog Cookoff in Brooklyn.  Nick’s been after me for months about competing in one of these cookoffs, but I’ve had to explain to him several times that it’s just not my thing.  Am I a competitive person?  Used to be.  Now, I’m kind of trying to pursue a more life-zen attitude about everything to prevent me from flying into a competitive rage blackout and waking up surrounded by bodies.  This seemed harmless, though – I wasn’t actually competing, I was just helping a friend to achieve their dream.  And what friend doesn’t want to do that?  Am I right?  I was still on the fence until Nick explained that the competition was being held inside Kelso brewery where beside the endless hot dogs, there would also be endless beer on tap…  How could anyone resist?  I suited up in my “What the heo?!” t-shirt (heo means pig in Vietnamese), which featured an angry pig cartoon (very fitting for me), and was ready to rumble. 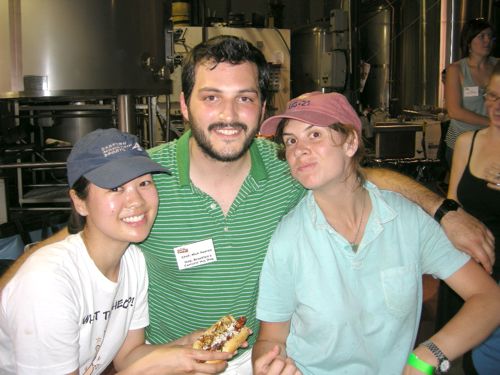 Chris and I showed up on Saturday morning and Nick had everything already organized and packed except for the corn salad, which he had left for me to season.  As usual, I dumped a heart-attack-sized portion of salt in (he actually had to refill his salt well after I depleted it) before heading straight for the lime.  A little sugar and cilantro later and all it was missing was fish sauce.  This wasn’t a Vietnamese hot dog, though, this was a latin-fusion dog inspired by Nick’s childhood of when his chef-mom would leave him and his 2 brothers at home with his food-loving, but non-chef dad.  Now, I’ve had Nick’s dad, Santi’s, cooking before and it’s pretty damn good.  But I guess when you’re used to your mom rolling out the culinary red carpet, you’re a little more discriminating when it’s dad’s turn to man the stove.

Nick’s dad would apparently cut up hot dogs and then mix them with canned corn that he had charred in a cast iron pan.  The roasted, caramelized flavor and crunch of the corn were perfect compliments to the meaty, savory, tender hot dog.  Nick decided to up his hot dog memory by adding elements of another favorite corn treat he’d had growing up, zocalo corn – it’s corn on the cob roasted over a fire and then smothered in mayo and sprinkled with cotija cheese.  Squeeze fresh lime juice on top, and the sweet crispy corn, creamy and tangy mayo, topped with savory, nutty cheese just pops with deliciousness.  Nick added the cotija cheese and mayo, plus crispy bacon lardons, fried onions (in bacon fat), grainy mustard, a little reduced balsamic and sherry vinegar syrup, then just a brush of Portuguese piri piri sauce for heat.  Oh, and Nick made a special trip to Sunrise Mart for Japanese Kewpie Mayo.  Why is Kewpie mayo so special and delicious?  Because it has the magic of MSG, and there’s nothing wrong with that!

At first, everyone thought there were too many ingredients in Nick’s “Corniest Dog in Brooklyn,” but when you think about it, it’s basically like making a deconstructed corn salad, with the onion, bacon, mayo, mustard, and acidity laid out as separate components.  Chris, Nick’s brother’s girlfriend, Taylor, and I followed our fearless hot dog leader into battle, each of us carrying magical elements to what we knew would be a winning dog.  We had to wait for our shift at the grill, so we placed our bags in the shade, and headed to the beer tap…  again, and again.  In fact, we visited that bar so many times that my husband decided that he would help out and just walked behind the bar and started pouring.  The Kelso employee who was actually manning the bar just looked at him, saw that he was helping, and shrugged her shoulders and let him continue.  He basically remained behind that station for the rest of the day. 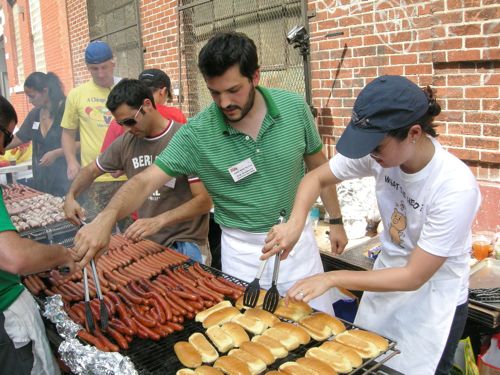 Our shift at the grill

Meanwhile, we grilled hot dogs and buns to perfection.  The buns were drizzled in mayo, lined with grainy mustard, and smeared with fried onions before laying the hot dogs down, which were then brushed with piri piri.  We brought all of our mise to our serving station and began placing the hot dogs, cut into thirds, into muffin liners before being topped with the corn salad and cotija cheese.  Each dog also got a triangle of lime to be fresh-squeezed on top.  We started joyfully handing out tastings to the crowd of people who had gathered around our table until we realized that we had miscalculated, been too efficient, and that we were not allowed to serve out our hot dog tastings yet.  No worries, we apologized and just kept on assembling, covering our table in little bites of latin-inspired corn & cotija hot dog goodness. 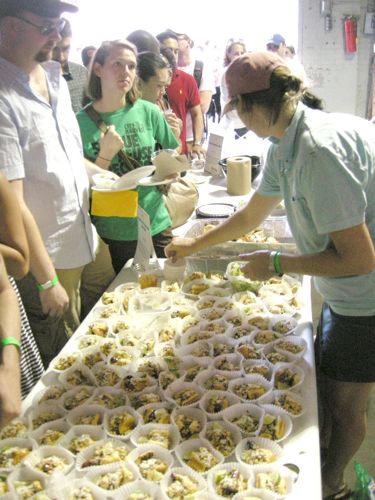 I don’t know if someone said “Go!” or if a whistle blew, but all I know is that suddenly, we started handing out the dogs.  It probably took under 2 minutes for almost 200 tastings to just disappear from our table, leaving behind nothing more than cotija dust and crumpled muffin wrappers that blew across our piri piri-stained paper tablecloth like dust balls moving across the street in the old west after a gun fight.  We finally breathed out and were thankful that we had remembered to taste our hot dogs BEFORE passing them out as we had completely forgotten to save even one last bite for ourselves.  Then, we waited…  there was still one more round of tastings before one of the fine hot dog chefs in the room would be crowned champion.  Luckily, we were able to keep our cups full and our throats well-lubricated as Chris was still manning the tap and chatting up the crowd, answering questions about which beer to try as if he worked at Kelso and brewed the beer himself. 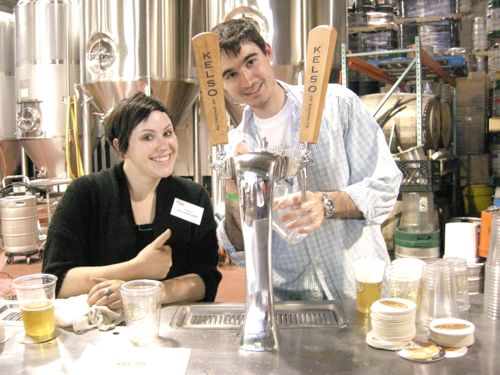 Finally, they began calling out the winners for “Audience Choice” and several other categories…  We waited to hear “Brooklyn’s Corniest Dog,” but still, we never heard it.  It looked bleak and I’m not going to lie, I was starting to feel the rage blackout creep into the corners of my eyes.  But then, we (and the entire room) were saved.  The last category, the ultimate win, “Best in Show,” was about to be announced…  They teased us, saying they couldn’t quite read the name… and then we heard it: “Nick Suarez.”  Our fearless leader had led us into Hot Dog battle and we had emerged victorious.

Did it feel good to win?  Sure… But it felt better to hang out with friends and all bust our butts together to help one of us achieve his dream: to win a Wiener Trophy.  I did have one regret though – I wish I had set aside a full cotija & corn dog for myself.  Just one bite of it wasn’t enough.

Filed under This never would have happened in Finance