I’ve been meaning to post about Egg in Williamsburg FOREVER and now finally have a chance, but my husband just told me that I’m a little late – it’s apparently being featured in every cab in NYC.  Late to the party as usual, and most-likely, underdressed.  Regardless, I have to sing the praises of this wonderful restaurant while it’s still fresh in my mind.

Here’s my disclaimer: I rarely go to Brooklyn.  Don’t get me wrong – I LOVE Brooklyn and wanted to live there when I first moved to Manhattan.  My husband, however, is not a Williamsburger.  So we moved to the Upper East Side where my husband and his 70 year old friends feel more at home.  No, my husband’s not actually 70, but he’s almost 27 going on 68 at the very least.  I don’t make it to Brooklyn because I’m lazy and I hate transportation.  I know, it sounds weird, but I do.  I hate driving, busing, subwaying, ferrying (sailing is OK because it’s more like a sport than commuting), training, flying, vanning, shuttling, mono-railing… whatever.  I hate it.  I love to travel in the sense that I like being in other places, but I hate the act of getting anywhere.  Yeah.  I have issues.  Way ahead of you there. 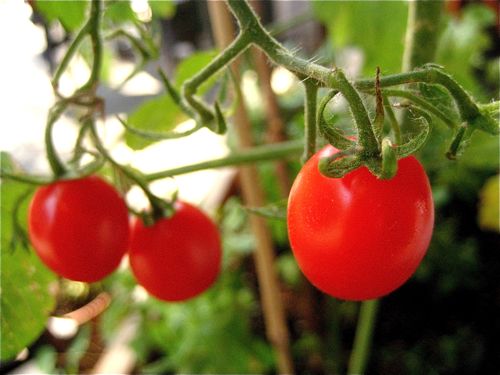 I almost picked and ate these as an appetizer...

But after my husband, my bro-in-law, and me dropped my cousin and her friend off at the airport, we decided to head to Egg for a late lunch, early dinner.  It’s an unassuming place with a lot of character.  Aren’t those the best types???  Egg is small, but its substance is deep: they only use local or organic supplies – some of which they grow themselves!  After we realized that there wasn’t really a wait even though a do-it-yourself wait list board was sitting out front, we quickly grabbed the very front table so that I could sit next to the grape tomato plant that was growing in the window, nay, the table box on the sidewalk.  Tell me the last time you dined al fresco in the company of a good grape tomato plant!  Thanks to my husband and my bro-in-law, I refrained from picking and eating said-grape tomato for fear of embarrassing them.  Had I been on my own, however…  Oh, and before I forget — I need to give a shout out to Mr. Reginald Andre, aka Big Man In Williamsburg (BMIW), for introducing me to this extraordinary dining establishment.  It’s too bad that even though he’s my good friend, he never reads this blog or else he could receive his kudos pseudo-directly.

Anyhoo, when you go to Egg, there are certain things that you MUST order.  Either you order a biscuit, fried chicken, a milkshake, or ALL THREE.  Normally, I recommend all three.  However, since we weren’t quite at dinner time and this little excursion counted more as a snack than anything, I stuck to just one out of the three and ordered a biscuit… or rather bisuitS… yup, I ordered a ham & cheddar biscuit with grits PLUS a side of biscuit in sausage country gravy.  Don’t judge.  Go ahead and tell me that biscuit with a side of biscuit doesn’t sound appealing and I will go ahead and call you a communist.  It’s your God-given duty to love biscuits as an American.  If you’re not an American, thanks for reading my blog… now go find & try a biscuit and learn to love it.  Oh!  And to keep you occupied while you wait for your order, they provide crayons for you to doodle on your paper tablecloth with.  The people next to us drew amazing sketches of eyeballs while I just practiced writing my new last name: Lvoff… sooo many consonants. 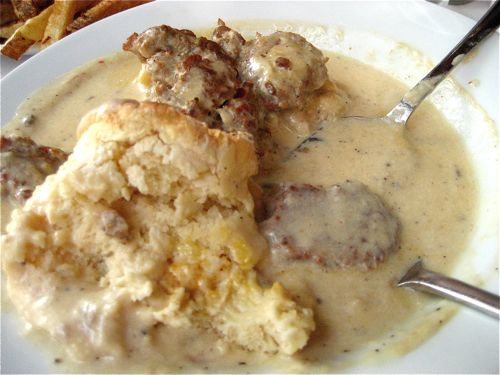 Here’s the thing – I wouldn’t have totally gluttoned-out except for the fact that I wanted country gravy to dip my ham & cheddar biscuit into.  At Egg, country gravy is made TO ORDER vs. sitting around in a giant pot over a water bath all day to develop one of those attractive, crusty skin layers on top.  Once that was explained to me in what seemed like an attempt to discourage me away from the side of country gravy, I stubbornly made my gravy stand and just ordered the entire biscuit & gravy appetizer.  What would you have done???

tell me that you wouldn't have done the same! ham & cheese biscuit WITH sausage country gravy.

Once my biscuits came, I knew that I had made the right decision.  You may question the logic behind a biscuit+biscuit afternoon snack, but I stand by my logic!  Once I was able to top dense, crispy-on-the-outside biscuit filled with salty ham & pungent cheddar, with a giant chunk of sausage smothered in perfectly peppery country gravy, I knew that my ordering had not been in vain.  Sure, my arteries went into instant contraction, but the buttery, salty, spicy, meaty melting pot of flavor that I experienced was surely worth blockage.  And while I’m no expert when it comes to grits since I’ve never had them south of Philadelphia, I will say this: these were the best grits that I’ve ever tasted.  Speckled with little bits of corn, these grits were mild on the palate (the right balance to the super-savory ham biscuit) and then sweet on the finish.  Normally, I just *like* grits but at Egg, I worship them. 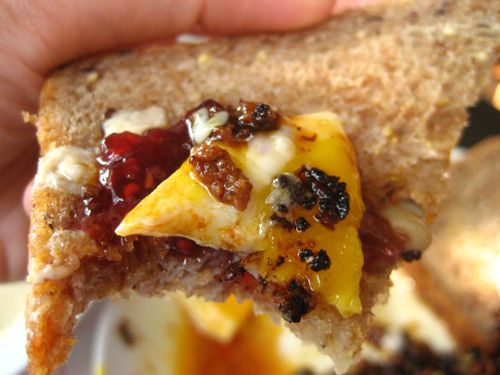 Eggs from Egg... wish I had tasted this bite vs. just photographing it.

My husband’s sunny-side-up eggs and chorizo with raspberry jam looked pretty damn appetizing as well, even though I never got a taste…  The color of his farm eggs was a vibrant marigold vs. the pale yellow Food Emporium eggs that I’m used to.  I *imagine* that they were delicious based on how quickly he consumed them, only pausing to allow me a picture, but stopping his generosity just short of an actual tasting. 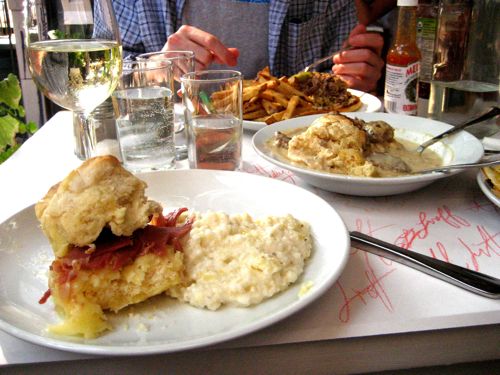 Now THAT'S a tablescape!!! My glass of chilled Muscadet was the perfect compliment to a savory summer's meal al fresco.

I’m sure you’ve seen the taxi advertisement on how great Egg is, but please allow me to reiterate: Egg is incredible.  It’s more than eggs, it’s reason enough to move to Williamsburg… or at least hop the L train over. 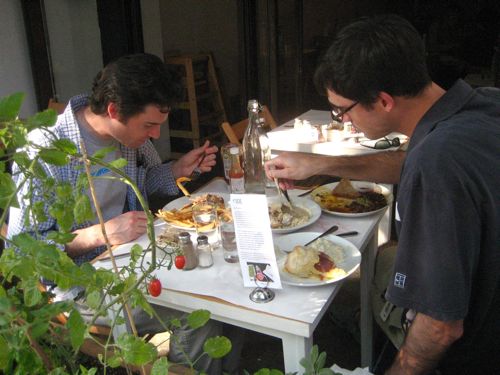 The Brothers Lvoff trying to ignore me as I hop around and take pictures like the blogger monkey that I am.

Filed under Eating my feelings and paying for it

One response to “Egg. It’s what’s for breakfast, lunch, & dinner”