Go ahead, mock the mini-miracles…

Yeah, I used to be just like you.  Laughing at the idea of “mini-miracles” with your hardened, pessimistic outlook on life.  Ok, who are we kidding?  I am just like you.  However, I am on an active quest to improve who I am by force since “goodness” doesn’t seem to come to me naturally.

I actually saw a documentary (on IFC – I love this channel, but truly, I love most channels since I watch a lot of mind-atrophying TV) about a man in Queens, or Brooklyn, or maybe the Bronx?, who owned a diner.  He and his wife were former hippies who lived hard, played hard, and looked like they had lived and played twice as hard.  Let me tell it to you straight – dude looked CRAZY.  He wore suspenders (but so does my dad – which isn’t a statement against crazy guy’s insanity) and had crazy, frizzy Bozo the Clown hair (clowns scare me).  Watching the documentary, I was pretty sure that I was 1) never going to go to this diner and 2) if I did, I would probably just order a cup of coffee and maybe a bottle of Purel.  However, he did say one thing that stuck with me…

One of the many things that he said that he taught his children was to accept the fact that they weren’t good people.  He said that if you accepted this fact and then just let it go, that life would become so much easier.  Wow, kind of a jerk thing to teach your kids…  Can you imagine being 5 and doing something wrong and your dad saying, “What can you do?  You’re a jerk.  Learn to love yourself.”  At the same time, the man had a point.  Why beat yourself up all the time over what’s right and what’s wrong and how somebody else feels because you may or may not have kicked them in their emotional shin?  Especially when you look around and it seems that everyone else is only looking out for #1.

Unfortunately, one of my many unlucky traits is that I’m just not wired this way.  I know I’m a bad person, but it just fuels the raging Asian guilt that I have embedded deep inside.  It’s like a river of hot, guilt-laced Sriracha coursing through my very core.  You are a bad person.  Why can’t you be more like your friend, Heather – she’s practically a saint and a doctor to boot.  Isn’t it just my luck that I was born with a natural tendency towards butt-headedness, yet just can’t accept or appreciate it?  So again, every week I try to fight my natural inclination to say, “everything sucks, so you can suck it, too,” and instead look on the brighter side of life.  Here goes…

Miracle #1: Swedish meatballs… high-tech style.  All I’m going to say is that from the first moment I ate a Swedish meatball at Ikea, I was hooked.  Save your Smorgas Chef money – if I want a rubbery meatball, I’ll pay $2 and get it at Ikea… of course I’m gonna need a ride out of the city, but whatever.  However, if you want a delicious, tender Swedish meatball, then you need to find yourself a way into a Nils Noren demo where Swedish meatballs are a main attraction.  Ground pork, veal, and beef are mixed with super-tiny dices of red onion caramelized with brown sugar, and seasoned to perfection.  Meatballs are shaped, deep-fried, then cooked in duck fat in a circulated water bath for a few hours until perfect, tender, juicy meatballs emerge.  Deep-fry those puppies (uh, I’m Vietnamese and all, but I do NOT mean dogs here – I would NEVER eat a dog!) and then serve them with mashed potatoes and lingonberry jam.  SHUT UP deliciousness.  I had an entire little plate of these to myself last night.  Sure, I had to work 12+ hours on end to get them, but it was damn worth it! 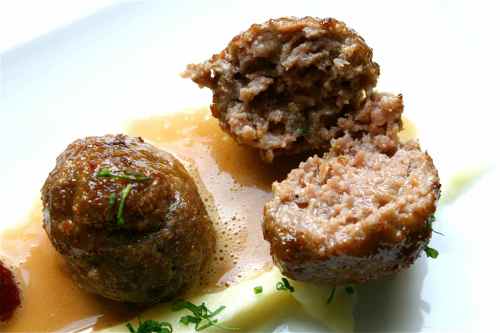 Miracle #2: Being in the right place at the right time.  Truly, I feel blessed to have been able to see the moment when Alan Richman did his skoal shot for Cooking Issues.  Even though my friend, Michelle, told me that she would pray for my soul last night (FYI – this is something like the 8th time a person has said that to me… add to that the psychics tracking me down to tell me that I’m empty inside and I might start to take this personally), I feel like I’ve been touched by an angel this week.

Miracle # 3: Jasper Hill Farm’s Constant Bliss cheese.  Ok, so I didn’t make it to Murray’s this week to pick up my own stash, but that’s not the cheese’s fault.  I’m lazy and I had to freaking see the Star Trek movie.  It’s like Sophie’s Choice – watch flashy movie or satisfy eternal craving for pungent cheese???  How can you choose?  But, in the end, like Sophie, I figured that I could choose one and still get the other one later.  Wait, is that how that movie ended?  Anyways, I will have my cheese!!!  Now that I know it’s out there, I will find it.  And if not, I can always go beg for some at L’École.

Another week, another adventure awaits…  Maybe I should throw on a knee-brace and and some elbow-guards in anticipation.  I need to take up something soothing, like yoga.  Of course with my luck, bending myself into a pretzel may be the worst idea I’ve had yet.  Damnit – and now I want a pretzel.  Typical.

One response to “Go ahead, mock the mini-miracles…”